Bife at the Bodegón 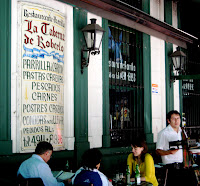 “The rich man isn’t the one who has the most, but rather the one who needs the least,” Juan the taxista said, “According to that criterion, I’m a very rich man.”

He weaved in and out of the Friday afternoon traffic on Avenida 9 de Julio, sipping mate from a leather gourd and gesticulating at the buses that cut him off.

I couldn’t imagine what.

“I play tennis! What other job could give me that kind of freedom?”

When Juan quit the rat race thirteen years ago and gave up a career in advertising, his family thought he was nuts.

“They told me I was lost, sin rumbo. But for me it boiled down to one thing: my time is more important than money.”

“Have you ever heard the phrase, ‘I’d rather be happy than be right’?” he continued. “Well, that’s what I told my family. And I’ve been driving a cab ever since.”

He picked up on the understanding in my eyes and suddenly slipped on his flirting mask. We were headed toward his favorite bodegón [tavern] in the Boedo neighborhood.

“Aren’t you going to invite me to lunch? I’ve told you all about me, and I want to learn more about you.”

“Your story is more interesting,” I assured him, “And besides, a friend of mine is meeting me, so I can’t.”

He heaved an exaggerated sigh, took a sip of mate, and turned onto Avenida Sanchez de Loria. The city’s Friday afternoon frenzy dissipated as we entered Boedo, a working class neighborhood with a rich tango history where Juan grew up.

He pulled up to the corner of a sycamore-lined street and pointed to a green awning that spanned half a block.

“There you go! La Taberna de Roberto. I’m going to hang out with the mechanic next door for a while, so if you need a ride home after lunch, just let me know.”

I ducked under the awning’s shade, climbed a short flight of cement stairs, and walked into what felt like a fluorescent-lit frat party.

La Taberna’s dining room overflowed with men of many generations who drank beer and pulled organ meats from table-top grills. A wrinkled Argentine flag hung in the window. Bottles of red wine rested on thick shelves above walls of painted brick. Police officers filed in and out the door, knocking back shots of espresso at the bar.

I texted my friend, a traffic-stopping, tango-dancing eye doctor from Avellaneda (a southern Buenos Aires suburb), to let her know where the taxista had taken me. She waltzed in and found me easily.

“Mucha testosterona, no?” she said, greeting me with a traditional kiss on the cheek.

We opened our leather-bound menus. There were no surprises among La Taberna’s dishes. This was, after all, a classic neighborhood parilla; by Buenos Aires law, steaks, offal, and pasta ruled. We ordered a 13-peso bottle of Malbec, and I prepared my body for yet another onslaught of beef.

But first there would be rabas (fried calamari). They arrived minutes after we ordered them on a metal platter the size of a football. Coated with a tempura-style batter and fried to tender, they approached amazing with a little salt and a squeeze of lemon. A simple, decadent prelude to the bife de chorizo (sirloin steak) to come.

We were fighting over the last of the rabas when our steak – an inch-thick slab of enormous that spilled over its serving dish – made its appearance.

To our amazement, our waiter stood tableside as we sliced into it. He wanted to make sure it had been cooked to jugoso (rare) as we’d requested. It was.

“This is a place that knows how to treat people,” my friend gushed.

I agreed wholeheartedly. I had rarely experienced that kind of attention, even in some of the city’s most expensive restaurants.

We turned our energies to savoring the bife, which tasted of charcoal, smoke and backyard barbecues. A little lean and a little tough, it wasn’t the best steak I’ve had in the Metropolis of Meat.

But it was nothing that a mouthful of Malbec and a few slices of tomato and garlic couldn’t remedy. We cleaned our plates, and our waiter cleared them with approval.

We’d officially eaten our way into a lazy Friday afternoon in Boedo, and the guys from the neighborhood had been nice enough to let us crash their bash at the bodegón.

Previous Salvation and Gnocchi
Next Holy Week – A Metropolitan Pause