Pork and Política at Don Justo 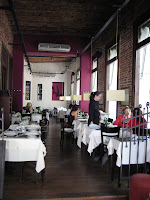 Buenos Aires – and Argentina in general – is still enveloped in the conflict that unfolded over two weeks ago when farmers began their strike against the government’s latest export tax increase.

Roadblocks in the provinces have prevented food from entering the city, and grocery store shelves once overflowing with meat and dairy products have been empty for days. Prices on the products that remain have inched closer to astronomical (in local terms).

Those in support of the farmers (and outraged by the food shortages) organized a series of cacerolazos, banging pots and pans and marching on the Plaza de Mayo. Violence broke out when these protesters were met by government-backed unions. The city’s newspapers splashed bloody photos across their front pages the next day.

On Friday, the farmers temporarily lifted the roadblocks, and the government agreed to begin negotiations. No resolutions were reached. The country remains sharply divided in the context of a conflict in which gray areas are mostly dismissed and a middle ground seems an impossibility.

Dubbing the crisis “Campo vs. Gobierno [Country/Farmers vs. Government],” the media has largely played up this division; some commentators have hinted that Argentina is sinking into the kind of chaos that erupted after the economy crashed in late 2001.

How does a taxi adventure fit into this grim picture? More than ever, I was hoping the driver would take me to a neighborhood parrilla so I could see how the food shortages are affecting the city’s restaurants.

Instead, I ended up learning about the health hazards of driving a taxi and eating at Don Justo, a ladies-who-lunch bistro in Palermo where there were no shortages in sight.

From the moment Jose Luis picked us up on the corner of Córdoba and Callao, we had more trouble than usual convincing him that we wanted to go to a restaurante de barrio, i.e. a simple place where the taxista could attest to the quality of the food.

Unlike many taxistas, Jose Luis isn’t satisfied with scarfing down “a hot dog on the run.”

“I like to eat well. This is a really stressful job mentally, although it’s very sedentary physically. That’s why the majority of taxistas have heart problems or high blood pressure. They eat badly.”

“My average shift is about 13 hours, so I really try to watch what I eat,” the taxista, who gave up carpentry two years ago to start driving a cab, continued, “No choripán [sausage sandwiches]. No sodas.”

Then he started rattling off a series of restaurants my chef friend from San Francisco and I had to try: La Escondida (a parrilla in Núñez where the lechón al asador [spit roasted pig] is outstanding), Munich (a German restaurant on Avenida San Martin in Villa Devoto), and La Grilla (a typical Argentine restaurant also in Villa Devoto).

He insisted that Don Justo was our best option for lunch. According to him, everything at the restaurant was good, and, as an added bonus, we wouldn’t have any problems ordering meat that was scarce in the rest of the city. It was useless to force our quest for something simple. Jose Luis would have none of it.

As we opened our menus, the manager shut off Rod Stewart and turned up the television news, which was re-broadcasting a speech by la Presidenta Cristina Kirchner: “…There will be no dialog until the roadblocks are lifted!”

As she poured glasses of Quilmes Imperial beer and bubbly water, I asked our server what she thought about Cristina’s words.

“Look, I don’t know how much you know about what’s going on here, but back when Alfonsín was president, he gave in to the demands of striking workers. This set up a destructive pattern. Ever since, people have used striking as a way to twist the arm of politicians in this country, and Cristina isn’t going to make the same mistake.”

She disappeared and returned with an overdressed Caesar. We half-heartedly picked through the pile of pancetta, olives, pseudo-parmesan cheese and wilted lettuce and ultimately gave up on the salad.

“The farmers’ production costs are low, so the export taxes are justified,” the server continued as she cleared our half-finished plates, “Our entire economy is based on a system of retenciones and subsidies. Without them, the country would collapse.”

She re-emerged in a flash with our main dishes: fresh fettuccini-style noodles with puttanesca sauce and beer-braised pork tenderloin with proscuitto and black olives. We marveled at the flavorful tenderness of the pork as we wrote off the puttanesca (embittered by dried herbs that, according to my chef friend, should’ve been thrown out long ago).

“It’s necessary to have dialog in order to respect democracy – and the rules of democracy – above all with governments elected by popular vote. But it’s very difficult to dialog with a gun at your head.”

Per Jose Luis’s suggestion, and in light of the hit-and-miss nature of our meal, we ordered espresso for dessert as we divided up the hundred peso-plus tab.

We’d lunched in a bubble of abundance, and there was a high price to pay.

Previous Holy Week – A Metropolitan Pause
Next Who needs beef when you’ve got blood sausage?