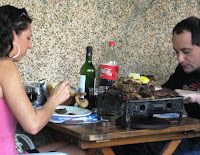 Sunday lunch in Buenos Aires, as in the rest of the Latin world, is a dearly beloved, family-centered, excess-friendly ritual. But on this particular Sunday, locals dove into the rite with even more passion than usual.

After three weeks of food shortages sparked by a nationwide farmers’ protest against government-sponsored export taxes, the agricultural powers that be temporarily suspended their strike. On this day, supermarket shelves and restaurants were replete with meat.

Taxista Antonio, who came to Buenos Aires by way of Naples when he was 14, was determined to include my expat buddies and I in this celebration of abundance (short-lived though it may be).

It took us a few blocks to explain to the tanned, diminutive cabbie that no, we didn’t want to go to a trendy restaurant in Las Cañitas, but yes, we did want to go someplace he’d been before, someplace with great food, someplace only locals would know about.

As we negiotiated our destination, he asked us in sing-song, Italian-accented Spanish where we were from.

When we admitted that we were all norteamericanas, he told us he had relatives in Toronto and Montreal. His pinched expression started to relax.

“What are you doing here?”

“You’re not just de paseo?” He slapped the steering wheel and shook his head, “I hope you find three Argentine boyfriends!”

“So do we,” my friend from Canada laughed.

In that moment, Antonio decided where he was taking us.

“I brought my wife to this place for lunch a few weeks ago,” he said, “Everything is good.”

“Do you miss the food in Naples?” I asked him.

“Yes, I miss the pasta, but I’ve gotten used to the way they make it here. But the meat here…The meat es esquisíta.”

Still basking in the warmth of our Italian cabbie, we scoped out the sidewalk tables at what appeared to be a fiercely local, no-nonsense neighborhood parrilla. With dancing steaks painted on the windows.

As lunch approached its climax, porteños of every stripe began to fill the tables inside and out: couples young and old, grandparents with their children and grand-children, even a twenty something who dined alone in headphones.

We perused the menu in the shade of the restaurant’s green awning, surrounded by the aroma of grilling meat, the sounds of animated gossip, the sight of table-top grills piled high with beef and organ meats, and the lazy touch of a Sunday breeze.

Our foreign palates were ready to rock.

Unfortunately, the beef empanada that launched our feast turned out to be a harbinger of the under-seasoned, overcooked food to come.

The cuadril [tri-tip] I ordered chewed like a tire and tasted like a dirty rag; my Canadian compañera’s bondiola de cerdo [pork shoulder] was a little better, saved by its fat and a squeeze of lemon.

The ham, fried egg, black olives, tomato, and roasted peppers in my New Jersey friend’s chivito [Uruguay-inspired steak sandwich] overwhelmed the slice of dried out beef in the middle.

But the French fries alongside the chivito – crispy and McDonald’s thin – were among the best I’ve tasted anywhere; we noticed our neighbors ordering entire platters of them.

Disappointed by our carnivorous exploits, we held out hope for the grilled red bell peppers that were supposed to be our appetizer.

“The grill is completely full,” our server explained, “There’s no room for your peppers right now.”

We sipped our Malbec and waited a little longer, eyeing the sizzling crocks of provoleta [grilled provolone cheese] that kept sailing by.

“That looks really good,” my Canadian compañera said, “And it would go great with my peppers.”

We nodded in agreement and flagged down the server, determined to rescue our meal from mediocrity.

“Look,” he said, “We can’t do the peppers. We ran out of the marinated ones, so we’d have to put raw ones on the grill, and with the heat we need to cook the meat, they’d burn.”

We chose not to argue with this wacky logic, resigning ourselves to the idea that there was simply no room for vegetables as the Metropolis of Meat recovered from the farmers’ strike.

“Our peppers have been marginalized,” I said.

But in the end we were still grateful to Antonio for giving us an intimate peak into BA’s beefy Sunday soul.

Previous Who needs beef when you’ve got blood sausage?
Next The Adventure Goes Tango