Passion and Pizza: The Journey to San Antonio 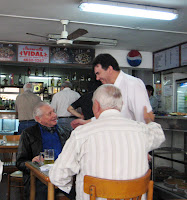 The following entry is rated R, as it contains adult material.

“Aren’t you going to invite me to eat with you?”

“Only if it’s lunch and nothing more,” I said.

“Not even a kiss on the cheek?”

Laughing away my incredulity, I hopped out of Hernán’s taxi before I had a chance to reconsider his terms.

Hernán had picked me up near the obelisco on Diagonal Norte, launching his amorous assault as soon as I asked him to take me to his favorite restaurant.

“Only if I can eat with you,” he grinned.

Before I could refuse him, he started giving me a run-down of his latest romantic exploits.

“Once I picked up this redhead near the casino. She was about 40. Beautiful. We got to talking, and I invited her for coffee. We ended up at my house…in the shower…We didn’t come out until dinner the next day. I took her to La Taberna de Roberto – ”

“Oh, yes! I know that place,” I interrupted him, trying to change the subject, “It’s great!”

“I also met my ex-girlfriend in my taxi. Was taking her to her novio‘s house – but she ended up going home with me instead!”

At that point, I realized it was pointless to try to stop Hernán from reading me his sexual resume.

“You know what? I almost picked my ex up the other day – I thought she was just another passenger. When I realized it was her, I just kept on driving! That relationship ended badly.”

I could imagine why.

“Have you ever had a one night stand?” he asked me.

“That’s not really your business, is it?”

“So your taxi is literally your vehicle to love,” I said.

You have to credit the man for being honest, right?

“Speaking of passion,” I said, “Where do you think I should eat lunch?”

Now we were talking.

“I could take you to El Fortín, but that’s way out in [Villa] Devoto. Or El Globito, but that’s a little far, too. Ah! I know. There’s a great little pizzeria in Boedo, a neighborhood place that’s been there forever. The fugazzetta is great, and the fainá…exquisíta.”

A few more minutes of deflecting the taxista’s x-rated questions, and we arrived at the corner of Boedo and Juan de Garay, where Pizzería San Antonio has been keeping the barrio happy for over 60 years.

After turning down Hernán’s final proposition, I walked past the paintings of a halo-topped, pizza-bearing San Antonio in the windows. Bearing the weight of curious stares, I squeezed into a table in the eye of the lunchtime hurricane. A server appeared and took my order.

He returned in a flash with a steaming plate of sin: a square of mozzarella and onion fugazzetta, a generous slice of fainá [flat bread made with olive oil and garbanzo bean flour], and a golden-brown empanada.

I quickly dismissed the empanada (dry and under-seasoned inside its flaky dough) and dug into the fugazzetta, a soft bomb of greasy indulgence that could only be neutralized with the crispy fainá. Individually, neither was anything special. But together, the fugazzetta and fainá made a delicious combination. Rich and rib-sticking. Cheese and oven-roasted onions with a garbanzo back beat.

I watched the neighborhood come and go as I finished my lunch beneath fluorescent lights and dying philodendrons. Retired men nursed mugs of beer and joked with servers. Young couples fed giddy toddlers who couldn’t sit still. Teens in school uniforms schlepped stacks of twine-bound boxes of pizza to go.

From his perch atop the wall-mounted menu, a wooden likeness of San Antonio observed us all. The irony (poetry?) of having been brought to a restaurant named for a saint by a man so happy to be a sinner was not lost on me.