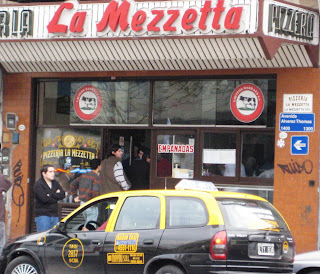 When Martín the taxista dropped me off at Don Lechón during last week’s taxi adventure, he was kind enough to let me in on another secret: La Mezzetta.

“Everyone is nuts about this pizzeria,” he said, “It’s not my favorite – I don’t like their dough. But you should probably try it.”

Try it I did – after I emerged from my post-lechón coma.

I showed up at La Mezzetta in the middle of a lunch rush. A line of hungry-looking men snaked out the door. The heat from the kitchen radiated through the table-less counter area, where more men stood and devoured slices of pizza and under the Spanish and Argentine flags.

The aproned man at the cash register ripped through the line of customers with an efficiency that would give Starbucks a run for its money. Within minutes, I was face to face with him ordering a slice of mozzarella and some fuggazetta (cheese, onion and oregano pizza with no tomato sauce).

Five pesos paid, I nudged my way through the crowd near the kitchen, handed the pizza man my receipt, and waited. At La Mezzetta – unlike many Buenos Aires pizzerias – the pizza does not sit in a glass case waiting to be reheated. They serve everything fresh rolex from the oven – screaming hot crust, bubbling cheese and all.

The pizza man grabbed two hot pies from the kitchen’s pass-through window, sliced my pizza and fugazzetta, and slid them onto a metal dish. The melted cheese flowed like water from a broken dam.

Usually I’m not a fan of the spongy crust and mounds of rubbery mozzarella that characterize the pizza here. But the Argentine-style pizza at La Mezzetta is something special, something I would seek out again and again. The cheese was excellent – flavorful and rich and over-the-top. And the crust was crispy – almost caramelized – on the bottom.

Their fugazzetta easily outclassed every other version I’ve tasted – the sugary crunch of the onions, the pungent oregano, and the endless river of cheese working together to create a delicious slice of sin.

How, I wondered, could taxista Martín not be in love with this place? I finished my slices, walked outside and looked for a truck to tow me home.

Previous Lunch with the Don
Next La Vita è Bella