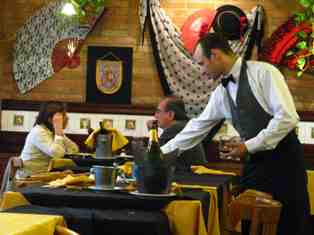 “I don’t have very sophisticated food tastes,” the taxi driver said, “I really like eating at the Coto food court in Ciudadela.”

When I explained that we were looking for something a little more soulful than a superstore cafeteria, the taxista radioed his fellow cabbies for help. No one responded.

I tried to beat back my despair.

The taxi driver picked up his cell phone.

“My sister’s dating a guy who really likes to eat. I bet he could recommend a place.”

My co-adventurer and I listened intently to the one-sided conversation that would determine our lunch fate.

“Hola Mirta. Soy Horacio. ¿Qué tal? Look, I have some tourists in my cab that want to go somewhere for lunch. No, not Puerto Madero. Does Diego know any good places around your neighborhood? Spanish food? His brother lives in Spain? Where’s the place?”

Horacio made a quick left. He was taking us to a Spanish restaurant where Mirta’s boyfriend brought his brother when he was visiting from Madrid.

“He says it’s good. He’s a real exquisito. He should know.”

Was I breaking my rules by eating at a place where the taxista had never tasted the food? Sure.

But how could I refuse a cabbie willing to go to the trouble of calling his sister for a restaurant recommendation? And how could I get out of Horacio’s taxi after learning that he was working seven days a week to save money for his oldest daughter’s Quinceañera?

Our destination decided, we drove out of the Buenos Aires I knew and penetrated a grid of sycamore-lined streets and two-story houses.

“Where are we?” I wondered aloud.

“In Buenos Aires, taxi drivers orient themselves by soccer teams – not by neighborhood,” Horacio said, “Right now, we’re in Argentinos Juniors territory. I guess that would be Paternal or Floresta.”

With that, the snowy-haired cabbie pulled up to Rincón Hispano and bade us goodbye.

I took one look at the lace fans, fringe shawls and guitars on the exposed brick walls – and one whiff of garlic and olive oil and seafood comingled – and thanked Horacio, his sister and her boyfriend.

The dining room was heavily populated with families, couples and locals of every generation. We slid into one of the last free tables, just below a bull-fighting poster.

A quick-footed server offered us a shot of chilled sherry – free to sip while we perused the menu. Sunday conversation echoed around us while Lionel Ritchie danced on the ceiling.

We ordered a merluza (hake fish) and shrimp stew.

I began conjuring up memories of the seafood cazuelas I’d tasted in northern Spain, hoping that this restaurant’s rendition might transport me back to those stomach-caressing flavors.

It was not to be. Though the poached hake fish fell off the bone, the shrimp were past their prime. The fried potato slices on the side – crisp and golden and salted with care – nearly rescued the stew, but they couldn’t make up for a tomato sauce that drew inspiration from dried herbs that should’ve been ditched months ago.

If the road to hell is paved with good intentions, so was our path to Rincón Hispano. Still, we wished our hard-working taxista well – flawed food radar, upcoming Quinceañera and all.

Previous The Golden Gnocchi
Next Last Taxi in Buenos Aires