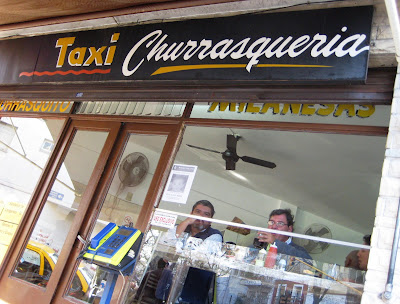 If I’d held a casting call for the ideal cabbie to drive my last taxi adventure in Buenos Aires, I couldn’t have found anyone to play the part more convincingly than Julio Verón.

After 18 years driving a bus and 26 years as a taxista, the sweater-vested sixty-something oozed urban wisdom – and his instincts seemed as sharp as his tongue.

Over the course of his cabbie career, Julio has been shot in the leg, stabbed in the back, and knifed on the head – all by women (“Women are far more dangerous than men,” he said). Nuns have blessed him and granted him protection (a Saint Teresa medallion hangs from his rear view mirror). And he’s stared down the barrel of a gun more times than he’s changed his tires.

“On the streets, you have to have a special sense of things,” he said, “You have to know how to talk to the doctor, the beggar, and the delinquent who’s pointing a pistol at you.”

To drive home his point, he told us about a recent ride with two thrill-seekers he’d picked up outside Cocodrilo, a glitzy Palermo nightclub, who offered him a line of cocaine.

“In this kind of a situation, you have to know how to answer the right way,” Julio said, “If you say, ‘No way, I don’t do that s**t,’ the guy isn’t going to be pleased. I know the lexicon. So I told him my doctor wouldn’t let me do drugs anymore. And I became part of his crowd.”

Despite his diplomacy, the taxista could still smell trouble, especially when his passengers directed him to a dead-end street in Lanus (a working class suburb south of BA). After one of them whipped out a gun and ordered Julio to give him the money and the cab, the exchange went something like this:

Julio: I’ll give you the money, but I’m not giving you the car. I need it to make a living.
Armed Passenger: What kind of idiot are you, old man? Do you want to die?
Julio: Why would a smart guy like you want to kill me? You’ve obviously got a lot going for you – you’ve got money, you can go out to good clubs. But I’ll give you the money – I can replace that.
Unarmed Passenger: Come on, man. Put the gun away. Just pay the man.
Armed Passenger: $@%#$%#&^%!
Julio: Do you really want to ruin your life? What good is it going to do you to shoot me?
Armed Passenger (still cussing, handing over a 50 peso bill): Do you have change?
Julio (taking 50 peso bill): No.
Armed Passenger: You’re a lucky old bastard. I’m even giving you a tip!
Julio (driving away with his night’s wages plus 50 hard-earned pesos): Thanks.

I could only nod in amazement. Julio’s survival went beyond street smarts. After so many years and so many passengers, he’d obviously mastered a few Jedi mind tricks.

So acute was this cabbie’s sense of things, I shouldn’t have been surprised when he delivered my co-adventurer and me to Taxi Churrasquería. As he braked in front of the corner cantina – with taxis parked at every curb and cabbies crowding the entrance – we could hardly contain our glee. Even the sign was yellow and black.

“This is exactly what we were looking for,” I told Julio, “It’s perfect.”

The wise old taxista winked and said, “Everything is homemade here. And everything is good.”

And then he was gone.

Heads snapped to attention as we squeezed past the doorway, through a mass of men and toward the fellow behind the counter who was taking orders and controlling the chaos. Squinting at a menu scribbled on a white board, I noticed that few things cost more than 20 pesos (less than $7 US). I asked him what dishes he recommended.

The man next in line interrupted the recitation of the day’s specials, looked my blonde co-adventurer and I up and down, and asked the question every man in the room wanted us to answer, “You aren’t taxi drivers, are you?”

“Not yet,” I should’ve answered. Instead, I told him no, but that a taxista had brought us there.

We ordered lasagne and a half portion of bife de chorizo (sirloin steak) with a side of butternut squash puree, found two seats at the tile counter in the back, and tried to be as cool as we were conspicuous. I had never seen so many cabbies in one place.

Naturally, our food arrived in a flash. Of course, the bife was grilled to red-pink perfection. And the lasagne – with thick layers of spinach, bechamel, ham, fresh noodles, and a generous helping of beefy tomato sauce – tasted homemade.

“This tastes like it was cooked by a woman,” I said to my co-adventurer.

“It was,” she said, pointing toward the semi-open kitchen.

I peaked around the corner. Sure enough, three women were in the midst of a calmly choreographed kitchen dance, communicating in silence as they handed over plate after plate of food.

I had a plane to catch, so we had to say “no” to the coffee that was free with our meal. (At Taxi Churrasquería, any dish over 10 pesos comes with complimentary coffee or tea. Every cabbie needs a caffeine boost, right?)

Walking away from my last taxi adventure in Buenos Aires (for now), I felt as if the city had conspired to make things fall into place with a poetry I never could have engineered on my own.

Julio Verón – streetwise, sincere, down-to-earth, and generous – embodied everything that is remarkable about Buenos Aires taxi drivers. And his restaurant of choice – honest, cheap, and reminiscent of home – was all that I hope for when I start a food quest.

Taxi Gourmet may be going global, but this final escapade reminded me that it couldn’t have been born anyplace but Buenos Aires. New York, you’ve got a tough act to follow.

Previous The Spanish Corner
Next Tasting the Biggest Apple