Lunch with the Don 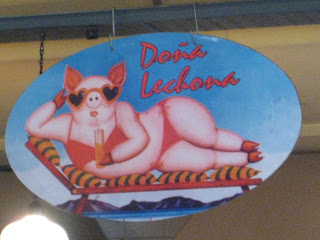 I was standing on the corner of Alvarez Thomas and Avenida Elcano, across the street from Don Lechón, the neighborhood restaurant in Colegiales where Martín the taxista had just dropped me off.

I stared at the giant sign, crowned by a smiling pig wearing a red beret. Inside, the tables were packed with people from the barrio – couples young and old, groups of workers on lunch break, middle-aged men eating alone and thumbing through the Clarín. A few rebellious souls had ordered steak or pasta. Everyone else was absorbed in a platter of lechón.

In Argentina, lechón, or suckling pig, is a dish usually reserved for holidays or special occasions. Expensive to buy and difficult to prepare, it plays a small but treasured role in the country’s meat ensemble. Mention lechón to many locals, and they’ll often start to moan as they relive their last memory of it. Martín the taxista is one of them.

“The gnocchi [at Don Lechón] are really good, and so are the lentils,” he said, removing his aviator sunglasses to drive home his point, “But the lechón is excelente. It’s not that easy to find good lechón in Buenos Aires.”

I stared back at him, trying to play it cool despite the fact that he’d propped the passenger seat at an angle that hid the amount on the taxi meter.

And despite the fact that, after I rejected his initial suggestion to go to Pepe Cantina (a charming corner restaurant where he’d never eaten), the thirty-something cabbie with the five-o’clock shadow had turned the tables on our encounter and started interviewing me.

What do you write about? Where do you like to eat? Do you dance tango? Do you go to La Viruta?

By the time he dropped me off at Don Lechón, I had failed to learn a single thing about the taxista. Except that he loved suckling pig.

As I wove my way to a table in the back, I tried to imagine Martín in his aviator glasses among the pig figurines, the animated pig posters, and the life-sized painting of a pig in a bikini (a.k.a. Doña Lechona) that hung over the parrilla at his chosen restaurant.

At the table next to mine, a blue-eyed man in a black v-neck sweater held court as he sliced through a steak. Customers came over to kiss his fair-skinned cheek. Vendors brought him wine catalogs. A real estate agent approached to tell him about a new space. He greeted everyone with a superior sort of warmth, offering them some Cabernet from Mendoza. I christened him the Don.

“Are you the owner?” I asked him, after all his company left.

“Yes,” he answered, passing me a goblet of wine, “Where are you from?”

When I told him I came from California, he felt it his duty to teach me something about the history of Buenos Aires. I was happy to listen. Fascinated, actually.

I shook my head.

“This created a huge mess,” he continued, “You had races mixing like they had nowhere else. Arabs and Israelis. Greeks and Armenians. Spanish and Italians. So there was a real lack of nationalism. People cared more about their home countries than about Argentina. They were always looking outside.”

“On the other hand,” he winked, “All that mixing of the races created beautiful women. We have the most beautiful women in the world here. And the best ice cream.”

I wasn’t about to argue.

“Do you know what you’re going to eat? You ordered lechón, right?”

Thank goodness I had.

“What part of the pig did you order?”

Without waiting for my answer, he waved over the server (who, like all the staff, had a pig monogrammed onto his breast pocket) and told him to make sure I got “a bit of everything.”

A metal platter of suckling pig arrived a few minutes later, garnished with lemon slices. The Don pretended to be reading the newspaper as I squeezed the lemon over the sizzling cuts of matambre (flank steak), rinoñada (just beside the rib cage) and pork skin.

I cut off my first bite. Tender at the bone, moist and cooked to perfection, the riñonada nearly dissolved in my mouth. Later, I sampled the matambre, which hid a layer of fat between the meat and its crispy skin. Sexy and excessive, the feast of pork tasted as voluptuous as Doña Lechona looked. Steak? Steak who?

“Are you going to get dessert?” the Don asked me, “We make a great tiramisu.”

“Do you use real mascarpone?”

With all due respect to the Don, I skipped dessert.

Instead, I left the restaurant with two lollipops in my hand, suckling pig on my tongue, and gratitude in my core. The Don had been more than generous. And Martín, the lechón-loving taxista, had been very wise to deliver me to him.