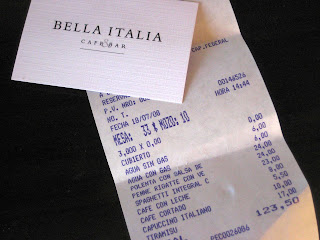 “I don’t eat lunch,” the taxista said, “I only eat fruit when I’m driving. I have to take care of myself, you know?”

Take care of himself he did. If I didn’t know better, I would’ve assumed that the bald cabbie in the sky-blue sweater vest had just come from a day spa. Such was his radiance.

He left the taxi meter off as he continued apologizing to my co-adventurers and me.

“I never eat en el centro. I live in the province, west of Buenos Aires, about 30 kilometers from here. Everything I know is out there – and I don’t want to take you so far away. Maybe you can find another guy who knows a little more about where to eat en capital.”

We were too awed by his graciousness – and his refusal to take advantage of three obviously foreign women – to be disappointed that he couldn’t bring us to his favorite restaurant. By the time we hailed another cab on the corner of Cabello and Bulnes, we were still drunk on his kindness.

When unsmiling Taxista #2 turned on the meter as soon as I shut the door behind me, I snapped back to sobriety.

His cab, a newish Volkswagen, was spotless. No rear-view mirror decorations. No laminated sign announcing his name.

As I threw him my can-you-take-us-somewhere-good-to-eat pitch, I noticed that the radio was off. I started to get a little intimidated, sensing that we’d somehow entered the upper echelon of taxi driving society (if there is such a thing).

Taxista #2 pulled over to the curb. We held our breath.

“There’s a place nearby that makes really good pasta,” he said, “How about that?”

“Sounds good…Have you been there recently?”

“Yes, I take my wife there on Sundays at lunch. I don’t really like to come to el centro, but she does. You know how it goes. It’s easier of I do what she wants.”

We nodded knowingly. The taxista shifted into gear and turned onto Avenida Las Heras. We were on our way.

“How long have you been driving a cab?” I asked him.

“What do you think about the recent increase in taxi fares? Is it affecting you a lot?”

“No, not really. As far as I’m concerned, they didn’t raise them enough, but it’s not up to me. It’s up to the government.”

“If you want to take cabs every day here,” he continued, “You have to earn at least 10,000 pesos [roughly U$3,333] a month. The people earning that kind of money aren’t affected by the fare increase.”

He coasted down Avenida Las Heras and turned onto República Árabe Siria. We had crossed into a tony section of Palermo, a neighborhood where the majority probably made 10,000 pesos a month or more.

“Look. If you eat there,” he pointed to the Romanesque façade of Bella Italia restaurant, “You’ll spend 40% more than where I’m taking you. And it’s the same food.”

A block later, he stopped in front of the Bella Italia Bar & Café.

“Is there any dish in particular that you’d recommend?”

“Pastas. They have lomitos, too. But the pasta is the best. And they make a good scarparo [tomato, basil/parsley, garlic] sauce.”

The three of us thanked taxista José and piled out of his cab – but not before he gave us his cell phone number and told us he could take us anywhere we needed to go, any day, any time.

When we stepped into Bella Italia’s elegant dining room, I could see why José’s wife enjoyed being there. White walls, white tablecloths, and the white servers’ outfits glowed in the sunlight that streamed through an opaque skylight. Floor to ceiling windows framed the tree-lined street.

Wine glasses and heavy silverware gleamed atop tables that were either occupied or reserved. We’d arrived at the peak of lunch hour, and the well-heeled were at Bella Italia to see and be seen.

“This isn’t what I expected,” one of my co-adventurers said.

Tell me about it.

Chic isn’t the word that comes to mind when I think about typical taxista hangouts. But chic was somehow within the realm of José’s possibilities.

We spied on other people’s food while we waited for our table, inhaling the smell of chopped basil on a plate of wheat spaghetti, admiring a golden bowl of polenta smothered in mushrooms.

By the time we sat down at a no-show reservation’s table, our appetites had been tempted to the point of frenzy. We ordered the polenta and the wheat spaghetti, along with the daily special: penne pasta with sautéed vegetables and chicken.

The daily special disappointed – the penne were cooked to al dente, but the chicken, zucchini and carrots that accompanied the pasta were muted, absent of fresh herbs that would have taken the dish to another level.

The wheat spaghetti excited us at first – with noodles and wild mushrooms smothered in soy – but turned out to be too oily and salty in the end. Some brightness was missing, some acid, some balance.

In the end, the polenta saved the day: soft, creamy, sprinkled with salty slices of parmesan and swimming in an earthy mushroom broth. My last bite of it felt like a caress going down.

Giddy from the perfection of the polenta, I insisted we try the tiramisu. I didn’t even ask if they used real mascarpone. Any place that calls itself Bella Italia must be using real mascarpone, right?

One bite of the dessert, and we could feel the silky butteryness of the mascarpone on our tongues. Subtle, delicate, and worlds away from the whipped cream and cream cheese that so often infiltrate the tiramisu in this town.

We ate slowly, savoring the interplay of coffee and chocolate in that beautiful tiramisu, so grateful to taxista José (and his wife) for leading us to a taste of la dolce vita.