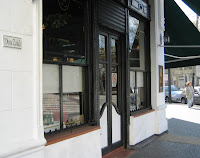 “I wish I could eat with you,” said Jorge the taxista, “But I really can’t. My wife would kill me.”

“Yep, it’s just too dangerous. I’m a handsome guy. My wife doesn’t let me go out alone. When I get fixed up, you better watch out.”

We were actually on our way to Flores – much further afield – when the taxista stopped in front an elegant corner parrilla in Villa Crespo and insisted I eat there.

“The food is better than the place I was going to take you. Besides, I don’t want to take all your money.”

Unlike so many taxistas who are part of these adventures, the former lingerie store owner hadn’t even blinked when I asked him to take me somewhere good to eat.

“Sure, linda, ” he said, shifting his Fiat into first, “No problem.”

As we sped out of Palermo Viejo toward Flores, Jorge told me about his three kids (his 28 year old daughter, an accountant; his 22 year old son, who makes $2000US a month as a systems analyst for Microsoft; and his 18 year old son, who’s in college and who “spends all my money.”)

“85 out of 100 people in Argentina work in jobs they don’t like,” he said, “I know people who are making a million dollars a year who don’t have time to enjoy their money.”

“That’s true everywhere,” I told him.

Obviously, the madness of negotiating Buenos Aires’ streets had not yet gotten to Jorge. He didn’t even react when a bus cut him off as we merged into the thick of the Friday afternoon traffic on Honorio Pueyrredon.

He was so relaxed, in fact, that I forgot to ask him about the controversy surrounding Mayor Macri’s proposal for bus and cab designated traffic lanes. Would he have cared?

He seemed worlds away from this latest battle in the ongoing war between taxistas and bus drivers as we rolled to a stop in front of Don Zoilo.

“Order a bife de chorizo [sirloin steak] and a salad,” Jorge said, “You won’t spend more than 30 pesos. And it will be good.”

I marched into the crowd of men at Don Zoilo and ordered exactly what the taxista suggested, plus a chorizo sausage to start, and natilla (custard) and coffee to finish. Everything except the coffee was delicious.

My inch-thick steak was tender, juicy, and a punto [medium rare] as I’d ordered it – I barely had to press my knife to slice it. The chorizo sausage – seasoned with just a touch of oregano and sweet red pepper – was gorgeously greasy and gristle-free. And the natilla, a creamy grand finale perfumed with a hint of lemon and covered with a thick layer of caramelized sugar, cavorted between the sweet and sour zones of my palate.

As I scraped up the last of the natilla, I tried to discern where the trip with Jorge had left off and the wonderful meal at Don Zoilo had begun. In the end, it was impossible to figure out; journey and destination had merged into a seamless feast of pleasure.

Previous Taxi Tension
Next The Dark Side of the Adventure